Utilization of bio-waste with a positive impact on the environment and the local community in Liege, Belgium

12.5.2021
The Ochain Energie biogas plant project could serve as a model example of how cogeneration can be optimally used in agriculture. The project had to overcome a large number of administrative obstacles since its inception but, in the end, after more than 5 years, the complete biogas plant was put into operation and subsequently expanded. The Belgian project is proof that low-emission production of power and heat from local sources which at first sight could be considered as waste by its vicinity is worth recognition. 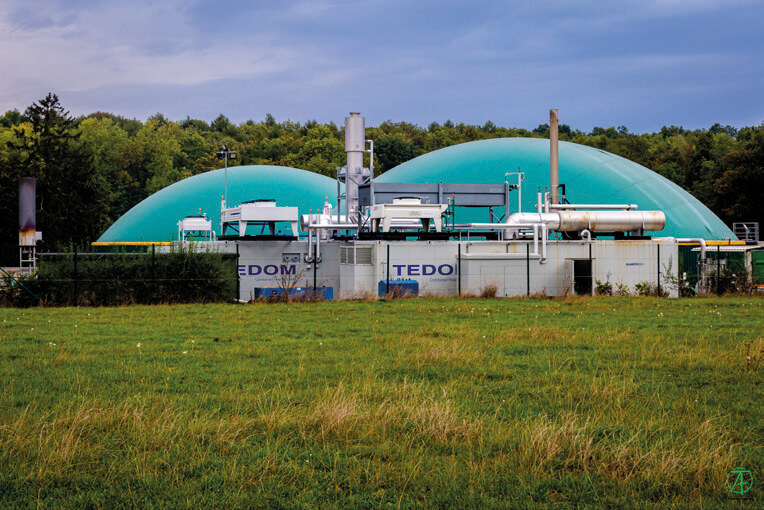 The main motivation of the owners was the construction of a renewable energy source without a negative impact on the environment and nature. The very appearance and functional elements of the biogas plant have therefore undergone changes during the project preparation. For example, fermenters and other reservoirs have been placed a few meters below ground, and are also located behind vegetated embankments to minimize their interference with the character of the local landscape. Investors also involved the local community in the project so that the project would benefit not only the agricultural cooperative but also other people in the area. The whole project, therefore, has a total of 5 co-owners which add a powerful civic dimension.

The power from two CHP units covers a part of local consumption and it is primarily supplied to the grid. It, therefore, forms the main component of the cooperative‘s income. Heat, or a small part of it, is used to regulate the temperature in the fermenters to guarantee the correct decomposition of organic matter. The majority of the remainder of the heat is then distributed by heat pipeline to a local nursing home situated approximately a kilometre away where it covers all the heating and hot water requirements for approximately 120 people. The biogas plant supplies heat to the local joiner’s shop as well. Utilization of bio-waste with a positive impact on the environment and the local community in Liege, Belgium

“It all started very simply, we wanted to find another source of income for the family farm. However, we did not want to embark on the path of industrial automation in livestock farming. Agriculture must be approached with respect, with an open mind and one must also be prepared for new trends in this field. Biogas in combination with cogeneration is beautiful proof of that.”

In a biogas plant, biomass is mixed in the fermenters, heated in a controlled manner and subsequently decomposed. This decomposition produces biogas with a high proportion of methane. Agricultural raw materials and other biological waste serve as the input raw materials. The resulting biogas, which is cleaned of unwanted impurities such as water or sulfur dioxide, is used as fuel for the CHP unit. Thanks to the capacity of the large storage, it is possible to operate the CHP unit for 24 hours a day, with only small service breaks during the year.

The project itself was launched in 2016. The installation of the first CHP unit took place in 2017 and was provided by our Belgian partner ESPY and installed in situ by CORETEC ENERGIE. Due to its great success and sufficient capacity of the entire system, the cooperative decided to install an additional CHP unit three years later. ESPY and CORETEC ENERGIE also supplied the biogas plant with biogas purification and heat distribution systems.

Each of the TEDOM CHP units has an output of 600 kWe at a consumption of 430 Nm3 of gas per hour. The electrical efficiency of the system is 42.8% and the total efficiency reaches 89%. The biogas plant consumes approximately 36 000 T of biomass per year. Thanks to this technology, about 6 000 tons of CO2 are saved per year. The power produced from one CHP unit per year would be enough to cover the consumption of about 3 000 households.

Truly green, local and highly efficient as well as highly stable energy output. A notable factor of this project is the commitment of the operator that the input raw material – biomass – is supplied only from local sources, which contributes even more to the low-emission concept. Besides, the whole cycle is a closed-loop. After the fermentation process has ended, the entire content is further used as fertilizer, because the substrate does not lose its quality during the fermentation process. Each farmer eventually receives the same amount of digestate that they originally put into the  biogas plant.

TEDOM has many years of experience in the field of biogas applications. In its 30 years of operation, TEDOM has delivered more than 300 biogas applications to 25 countries around the world. In addition to the development of the CHP units themselves, TEDOM also has ample experience with the operation of the equipment which allows TEDOM to continuously obtain valuable data from their operation. The entire TEDOM group has supplied the market with more than 4400 biogas CHP units, mainly in Germany. Most of them are serviced by TEDOM or its partners.